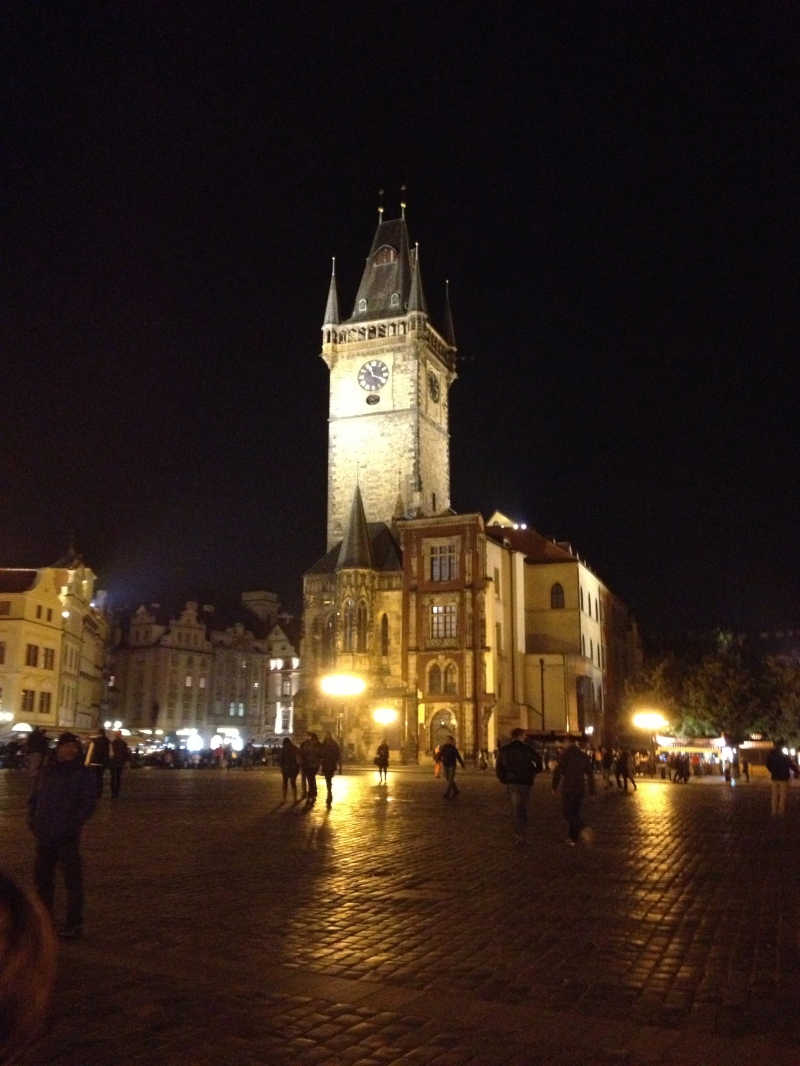 A Weekend in Prague.

On the 20th of September, our little group left for an entire weekend in Prague, Czech Republic! Our Ethnic Diversity professor, Dr. Heuberger, tagged along. When we arrived, our first order of business was a tour of Old Town.

Prague has some beautiful, dark architecture.

The Municipal House in Prague serves as a concert hall and meeting place.

The Municipal House is in the Art Noveau style.

This is a crappy picture of the opera house. I’m not sure what I was going for here. 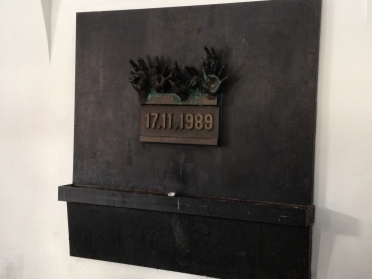 A memorial to the peaceful student walk that led to the Velvet Revolution. 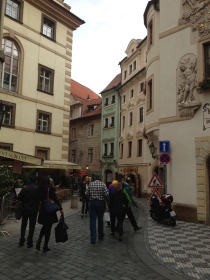 That green building was the home of the first public bathrooms in Prague!

It was a pretty stormy day.

The Charles Bridge is decorated with all sorts of allegorical statues.

The Vltava River was lovely.

Every city in Europe seems to have a love lock brige.

This is for the VanEpps family: whose living room does this picture remind you of?

Hot chocolate! A go to for stormy days.

The astronomical clock in Prague. It has a rotation every hour of some of the saints, but it also shows the seasons, the months, the patterns of the moon and the sun, and the current zodiac sign.

Later, a few of us went to the mall in Prague (it was cooler than it sounds: a whole store devoted to Clinique! haha) and found ourselves some alcohol-infused frozen yogurt for dessert. 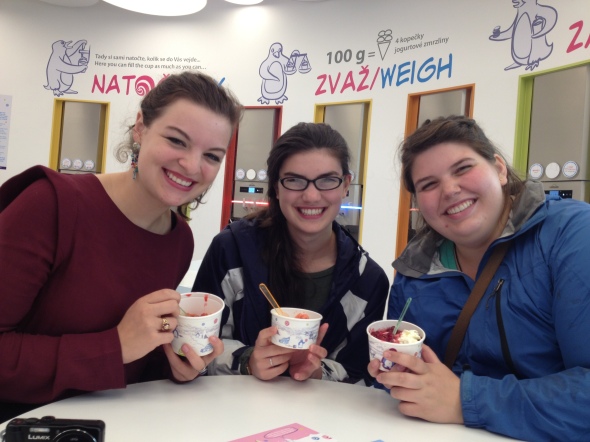 That night, we made some friends from Australia at our hostel. As per usual, we stayed up way too late. Surprisingly, they shared our love of Smash Mouth.

They were very kind.

Please note that I was already in my turtle pajamas by the time we met them.

On the 21st we took another guided tour, but this time we visited Prague Castle and St. Vitus Cathedral. The Cathedral was out of this world beautiful! 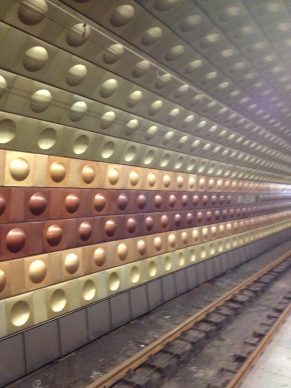 On the subway to the castle.

The front of the castle.

The gate into the castle grounds. 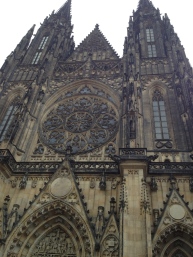 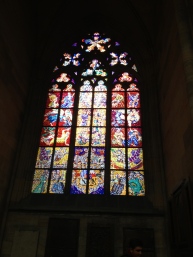 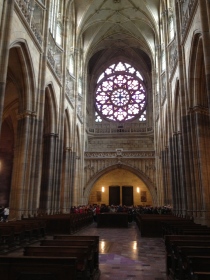 An unfortunately blurry photo of the organ!

The tomb of John of Nepomuk. 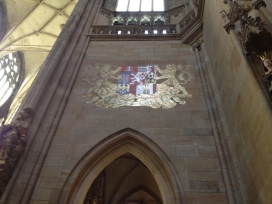 The seal of the Czech Republic.

The other side of the cathedral.

The rest of our tour that day concluded with exploring the castle grounds and appreciating the views.

A tiny model of the grounds.

An original medieval street. Kafka started his infamous “Metamorphasis” in that blue house. 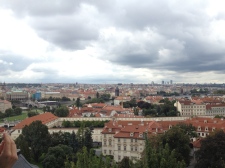 The view of Prague from the castle.

There was an awesome wine garden on they way down from the castle. We didn’t stop, but I admired the wine rack that my parents desperately need.

That night, many of our fellow friends went on a pub crawl. Three of us (Joleen, Gabe, and myself) were all pretty tired, so we relaxed in a shisa bar (for those who are worried about my singing voice and/or my health: no, I don’t smoke. : )

I accidentally ordered a B-52…I was shocked when the server lit it on fire! 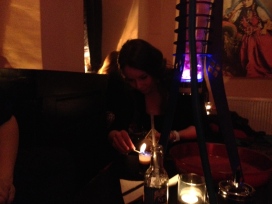 What is she doing?!

Shock…maybe some fear in there, too. 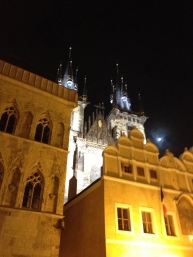 We decided that Disneyland secretly runs a gothic version of their theme parks in Prague.

The powder tower in Prague, all lit up. It is one of the main entrances to Old Town.

On our last day in Prague, we went on another tour. Apparently, I wasn’t feeling it–I have exactly zero pictures from it. But we also did something totally unforgettable: we went to an ice bar!

Entrance to the Ice Pub.

It was sealed off behind these big, freezer-style doors.

Fluffy ponchos for everyone!

The menu. Three options: vodka with juice, juice, or juice. In different colors. 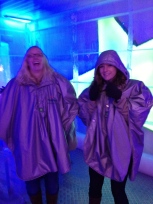 The ice sculptures were a bit weird. 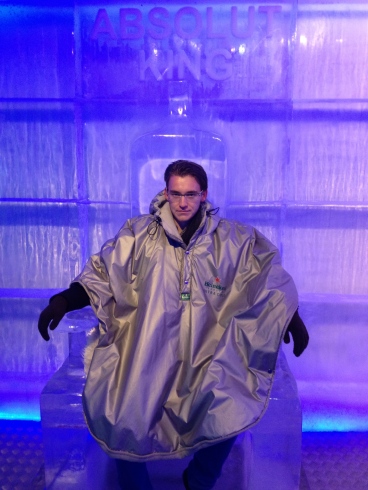 Our drinks in their little ice cups.

The drinks kept sliding off the table, so we had to hold them.

Last but not least, we contributed to a charity project in Prague while we were there. We donated a few euros and painted a brick, which symbolized the houses and activities that the Beneficial Brick Initiative would build with the donations. We went free form, but made sure to include Linfield on the brick, too. 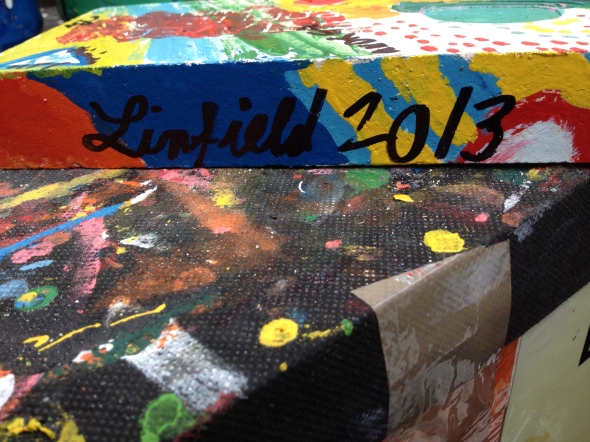 Prague was unlike any city I have ever visited, in Europe or otherwise. I am starting to realize that every city in Europe has its own feeling. Prague’s was rich, vibrant, and revitalized. There was a special energy in this city that was once behind the Iron Curtain and the capital of a country that has only been under its own influence and control for a very short time. I would highly recommend it for a wandering traveler!

21 Sep This entry was published on September 21, 2013 at 10:12 AM. It’s filed under A Weekend In..., Austria, Travel and tagged Czech Republic, Prague, Prague Castle. Bookmark the permalink. Follow any comments here with the RSS feed for this post.