A Weekend in Munich.

Joleen, Gabe and I went to Munich the last weekend of September with one purpose in mind: Oktoberfest.

I’m not sure if Oktoberfest is really a purpose, though. Maybe a goal. Or a plan. Or something. Regardless, we had an incredible time.

When we got to Munich after an early train ride, the first order of business was finding a dirndl for me. A dirndl is a traditional Bavarian trachten, or special occasion outfit. Joleen purchased her dirndl in Munich the year before, while Gabe purchased his traditional lederhosen in Salzburg earlier in the semester. Off we went to the trachten outlets, and the first green dirndl in my size was the one!

Gabe and me in our trachten with some champagne.

Then we went to the actual Oktoberfest. Oktoberfest is basically a huge carnival for adults with a lot of beer involved. The beer at the festival is strong and comes in one liter steins. To get a beer, you need to be either in a beer tent or an outdoor beer garden. The catch? You must be sitting down, at a table. Not standing in the aisles, not half-assedly (haha) at a table, but actually fully seated. We started with a beer garden because it was easier to grab a seat. Each tent has its own personality, too, so the choice of tent/garden is an important one. We got lucky the first day and found a garden we liked with nice people.

Except Gabe. Gabe always has some great faces to share before he’ll smile. 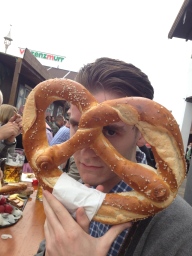 This one had the best ceiling, I think.

The Hippodrome Tent, which is the “celebrity” and “rich people” tent. We just waltzed on in the first day! It was very cool to see. 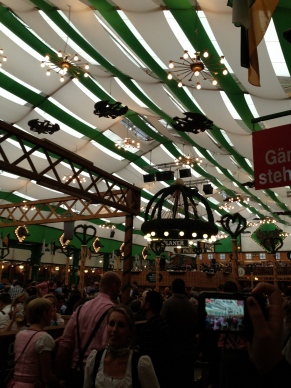 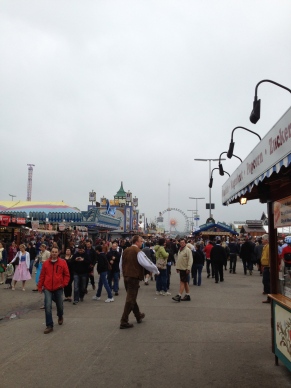 The carnival part of Oktoberfest.

Rides and gingerbread and fun!

The big (and overpriced) ferris wheel.

We met all sorts of people from all over the world, including some older men from New York, some younger girls from Singapore, and many people our age from Germany. One of the best things about Oktoberfest is that you can literally go up to anyone and strike up a conversation. The first question is always, “Where are you from?” or “Why did you come to Oktoberfest?” Although the answer to the latter is almost always, “for the beer.”

We stayed at the cheapest accommodations we could find: the Four Seasons. It was over the top fancy for three intoxicated college students. We had one backpack for the three of us. But the beds were comfortable and the breakfast was divine (I wish I had pictures of the breakfast. I had some of the best smoked salmon I’ve ever had…and I live in a state known for its salmon).

On Saturday we got a late start, so when we did finally make it into a tent, the vibe was all off. Everyone was already way past drunk and we were all still sober. It made it hard to find any seats, and we eventually gave up. While we walked off our annoyance though, we found some lunch. We eventually went back to the festival and went into a pseudo-tent called the Kaiserschmarrn. As you may recall from this post, Kaiserschmarrn is a cut up pancake with delicious toppings. While this tent didn’t serve beer, it did serve sweet desserts and good cocktails. There was also a great band. We found seats, had some cocktails, and really enjoyed ourselves. It was so so much fun.

The Kaiserschmarrn “tent” on the outside. 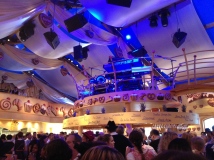 The cute candy decorations were everywhere!

Another view of the band and the main bar.

Overall, we had an incredible weekend, even if it wasn’t a “traditional” Oktoberfest experience. I can’t wait to go back some day!

Goofballs on a train. 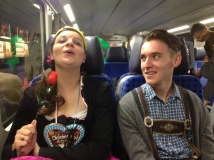 Thanks for stopping by, and please, go have a beer.

14 Oct This entry was published on October 14, 2013 at 2:08 PM. It’s filed under A Weekend In..., Austria, Travel and tagged Munich, Oktoberfest. Bookmark the permalink. Follow any comments here with the RSS feed for this post.

Older: A Visit to the Austrian Parliament
Newer: A Week in London.

2 thoughts on “A Weekend in Munich.”